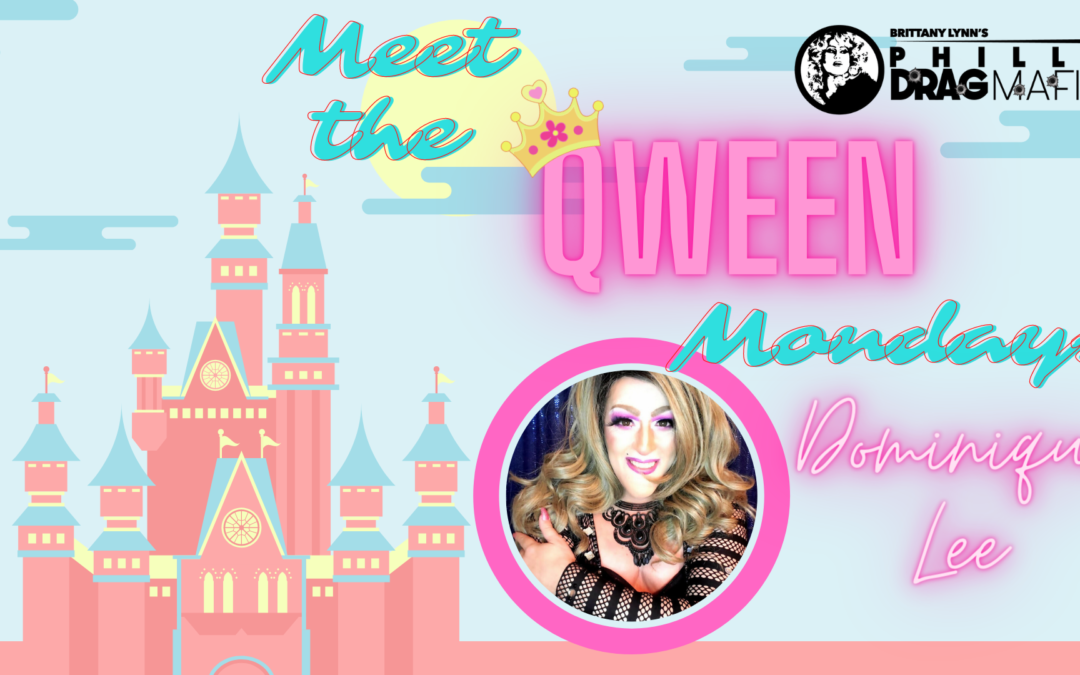 Pronouns: (Out of drag) He/ Him (In drag) She/ her
Dominique Lee may seem like a new face in the Philly Drag scene, but her journey in drag started close to two decades ago. She will tell you she had been doing drag “collectively three years…. over a nineteen year period.” And here is her story.

Dominique was discovered in the late 90’s at the now defunct Colosseum in Sayreville, New Jersey. The famous spot boasted a highly attended weekly talent search with New Hope legend Monica Rey, which after her passing went to another legend Princess Janae, who has also passed. Many notable names were regulars at this hotspot during their early careers, inlcuding the lovely Lady Marissa and, of course, Philly’s Drag Queen Brittany Lynn-both of whom were welcomed into the Colosseum family and appeared on many of their event promotions. Dominique was then seen in many of Brittany Lynn’s Philly shows at the 12th Air Command and many venues around the Phily area, back when Drag Mafia was still in an early incarnation of what it has become today. There’s many cave drawings from back then with Dominique and other founding members of Drag Mafia such as Alona, Brenda Lamour, Salotta Tea, Ginger Alley, and Tina Montgomery.

After a fiftenn year hiatus, Dominique has been bitten bythe drag bug once again and has brought her performance style of being a “campy, old school, comedy Queen” back to the Philadelphia stages.
Calling herself the “geriatric gem” of Philly, Dominique also prides herself on her “unique life experiences, my willingness to learn and listen, my dedication, punctuation, professionalism, and my lack of Ego” as qualities she brings to her performances. She stated she is proud of all of her work, “even if it was bad it was a learning experience”, and added that “I’m very proud of my comedy acts that landed, and charity jobs, my brunches and online work.” Her march with the Miss Fancy Brigade in early 2020 “was an amazing experience and a favorite memory.” Other favorite monents in this second phase of her drag career have been, “hosting my own show and really putting the work in for Queen of the Night-a monthly show producd by Drag Mafia at Philly’s biggest Drag Show Institution-Bob & Barara’s on South Street. “I put an insane amounts of work in preparation for that show every month with the help of some really great people and, of course, my husband Todd.” Dominuque said. Dominique does not have a regular job, but she does help run a tannig salon in West Philly that keeps her busy on the side. When asked where she regulars performs now in 2020, she simply said, “My bedroom.”

Dominique draws her inspiration from comic book heroes, cartoons, pop culture, and Bond Villians. As for actual people that inspires her, Dominique stated, “I have some pretty strong female family members that I take inspiration from. Plus 1970’s Linda Carter Wonder Woman!” Her career goals are “One, to have one. Two, I really feel comfortable as a host and a judge. So I’d really like to do more of that and showcasing all the diverse amazing talent this is city is jam packed with! Honestly I just want to make you laugh. That’s always my goal.” (*Hopefully she accomplishes that third goal someday! Lol-j/k!)
Topher, Dominique’s name out of drag, feels that his drag prsonality comes across differently than his offstage self. “Believe it or not despite being more of an insult comic type of Queen, Dominique Lee is a LOT nicer then Topher. Some people may argue that fact but that’s what I think.” Dominique stated.

Like most queens, Dominique’s favorite thing about performing is the attention, she said jokingly. “Honestly I get my life when people are having fun. When the joke lands, when the moves work, when the look… is acceptable’. And again like most queens, what she does not like most about drag is the getting ready, handsy Patrons, and unprofessional co-workers. (*Note-to be clear, that ast part is referring to shows outside of her beloved Drag Mafia family performances. Thanks!)
Dominique’s most embarassing moment to date was two years ago, when, “I was doing a number in a very little outfit and my dong fell out halfway through”, but she also offset that moment by mentioning her title as the “Crowned Reigning MISS BOXES WINE…. hold your applause.” she said. “And I did win a Miss Congeniality back in the day… told you she was nice then me.”

Outside of drag performances, Dominique just enjoys hanging at home with her husband, playing video games, and eating. “Who has time for hobbies when you do drag?” Dominique said with a laugh and a huge mouthfull of food. (*Alledgedly but yeah we know...) She also enjoys rewatching early episodes of Survivor, and other reality TV. “The Office -I love that show. Plus a ridiculous collection of 80’s 90’s 2000’s movies and shows.”

The pandemic has hit her hard, like all other performers in gig work. “FIRST and foremost this has been a really difficult time for me in general. Besides the obvious money and going out to perform. This pandemic has kinda zapped some motivation to even participate in drag. I feel the interest has dissipated for viewers too so sometimes you feel it’s all for nothing.” Dominique said. But she then added this message to everyone, “In every pothole there is hope, you know if you jumble the letters about a bit and lose some altogether-in this time I’ve had to adapt and learn new things and do different types and styles of music, and I’m proud of the stuff I’ve put out so…in every pothole there is hope.”